A new instrument - a sound cyclotron

The Heaven's Carousel is a new instrument using space as an additiver synthesizer for moving tone sources. Major compositorial components are the pitch of the sine waves, the pattern when a tone is played and last but not least the rotational speed.
The concept of the Heaven's Carousel is to create a continuous acceleration of sounds forced on a circular pathway. So the acceleration of sound waves has more the shape of a spiral similar to a cyclotron - a spiral like accelerator used in particle physics. Interestingly the loudspeaker accelerate faster than the rotational speed as due to the centrifugal forces the radius is growing. This non-linear acceleration of  the  speed of the loudspeakers can be observed with the different inclinations of the strings at the three loudspeaker levels. 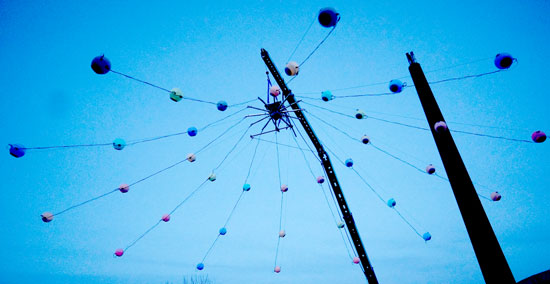 The different inclinations of the strings reveal the non-linear acceleration at the three loudspeaker levels.

The sine wave accelerator introduces also a new mode of sound spatialization bringing physical sound sources not only in motion but also varying their positions. Another spatio-temporal aspect can be taken into account playing with very short sound pulses up to 20 milliseconds. As the fast running carousels measures a diameter over 15 meters the sound pulse packages recompose differently in space due to the runtime of sound - literally a spatio-temporal granular synthesis. 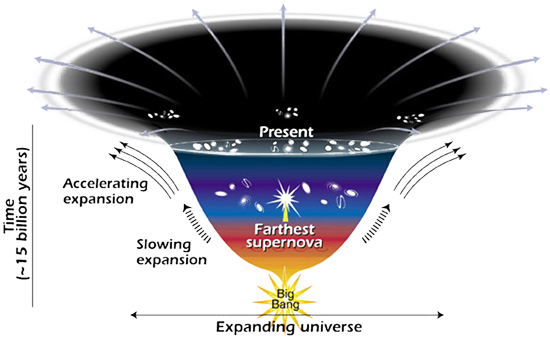 This diagram reveals changes in the rate of expansion since the universe's birth 15 billion years ago. The more shalow the curve, the faster the rate of expansion. The curve changes noticeably about 7.5 billion years ago, when objects in the universe began flying apart as a faster rate. Astronomers theorize that the faster expansion rate is due to a mysterious, dark force that is pulling galaxies apart (image: Ann Feild/ STScI)